The Hittites were a culture that existed in the region of modern day Turkey that was known as Asia Minor as well as Anatolia to the Greeks. The Hittite culture officially was born around 1600 BC out of the previous indigenous Hatti or Hurrian people.

The Hittites expanded their territory so much throughout the region that it actually threatened the regional stability of Egypt. The Hittite Empire can be broken up into two major periods, the Old Kingdom and the New Kingdom. 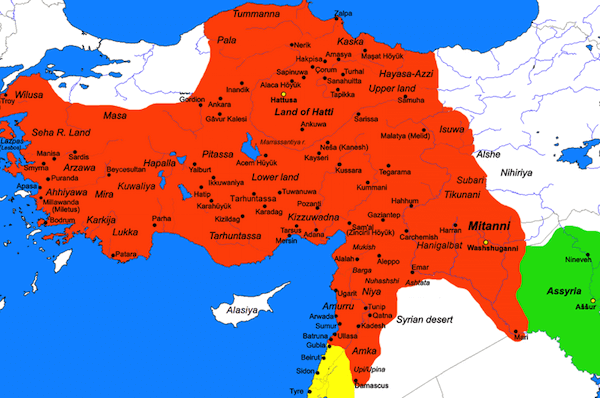 After the Hittite civilization collapsed in 1180 BC it fragmented into several different city-states known as the Neo-Hittite states. Some of these city-states survived until 800 BC when eventually the entire civilization was conquered and assimilated into the Assyrian Empire.

The Hittite people are especially important to study during the ancient era because they were one of the first civilizations to incorporate chariots into their military and helped bring the world into the Iron Age, causing their own collapse in the process.

The Hatti people were first created settlements around 2000 BC within the area of Anatolia, or modern day Turkey and Syria. They used the language of the Akkadian and Sumerian as many cuneiform tablets were discovered which was the diplomatic language of the time.

The Old Kingdom of the Hittite civilization existed between 1700 and 1500 BC and is first evidenced by their sack of the city of Hattusa under the Hittite King Anitta. Hattusa had existed since 2500 BC and was a regional power center for the local Hatti people who currently exerted control over the land.

King Anitta commanded the neighboring kingdom of Kussara and decided to become the regional power by taking over the kingdom of Hattusa. The local Hatti people were no stranger to violence as they had repelled invasions by the Akkadian Empire from both Sargon the Great (2334-2279 BC) and his grandson Naram-Sin (2261-2224 BC). However, Anitta succeeded and ended up razing the city and in his cruelty he cursed the city and anyone who would attempt to rebuild it.

Regardless of this curse a later king of Kussara would rebuilt the city and name it Hattusili I, meaning "One from Hattusa". It appears this city was rebuilt, repopulated and then integrated into the fledgling Hittite Empire.

The New Kingdom, also known as the Hittite Empire existed between 1400 BC and 1200 BC before it was completely taken over by the Assyrians.

Around 1180 BC much conflict and warfare was brought to the regions of Greece, Egypt, and Mesopotamia and saw the destruction of nearly every settlement in the area in Greece, Anatolia and the eastern shore of the Mediterranean Sea. This massive catastrophe was bigger in impact and scope than the collapse of the Roman Empire and was known as the Bronze Age Collapse.

The Hittites are mentioned many times throughout the Old Testament and Hebrew Tanakh as a common foe of the ancient Jews.

According to Genesis 10, they were the descendants of Heth, son of Canaan, who was the son of Ham, born of Noah (Genesis 10: 1-6). The name they are known by today, therefore, comes from the Bible and from the Amarna Letters of Egypt which reference a "Kingdom of Kheta" identified today as the `Kingdom of Hatti' (the designation the land of the Hittites was known by) but their own documents refer to them as Nesili, as do others of the time.

Byrce, Trevor, "The Kingdom of the Hittites". Oxford university press, 2005