At the time there was no modern siege technology that could attempt to breach these walls. There were large metal gates constructed at the point where the rivers ran through the city in order to prevent anyone from sneaking into the city underwater. However, this would not stop the ingenious Cyrus the Great during his siege of Babylon. There was also eight massive gates to help manage the massive foot traffic in this ancient city, the most famous one being the massive Ishtar Gate and was made of beautifully crafted blue glazed bricks.

Overall, the walls of Babylon were some of the strongest and most impregnable in the entire world. They were also some of the most beautifully crafted and decorated walls in existence. If the Ishtar Gate that is currently in Germany is any testament to the beauty of this city then it was probably unrivaled in the ancient world.

The city of Babylon and all of the Mesopotamian cultures were always known for creating massive and beautiful walls and fortifications. The first walls can be dated back to the original Sumerian city of Uruk around 4,500 BCE and were fundamentally constructed with gates, watchtowers and even ditches that ran around the walls. This ditch could be filled with water in case of an invasion so foes could not scale the walls easily.

The new city of Babylon which would come to be the massive wonder complex was actually built by the later Chaldean dynasty of Babylonia led by Nabopolassar and his son Nebuchadnezzar II (634-562 BCE). Nebuchadnezzar built three massive walls as well as the Ishtar Gate around Babylon that were about 40 feet high and so wide that two chariots could race around them. 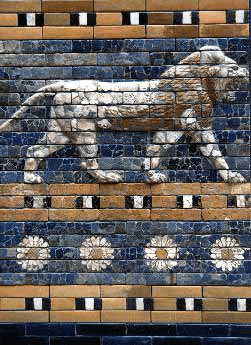 According to Herodotus the walls were 90 km (56 mi) long, 24 km (80 ft) thick, and 97 km (320 ft) tall but it is believed that he was exaggerating these dimensions. However, Antipater says that the Walls of Babylon were 10 miles in length and 25 feet thick, towering over 320 feet into the sky and seemingly corroborates Herodotus.

It is also known that Antipater used Herodotus as a reference and this may be why these two measurements match up so nicely. The main wall was just the outer one as there were many various inner-rings of walls to continually protect the city. Also built were also 250 guard towers that were positioned along the walls and garrisoned with archers and soldiers to defend against any invaders.

One of the great military accomplishments of Cyrus the Great in his establishment of the Achaemenid Empire was his siege of Babylon in 539 BCE. He was able to take the city by diverting the Euphrates River upstream in the north which lowered the water level enough that his soldiers could walk right through it.

At night his army snuck right underneath the metal gates and sieged the city before anyone even realized what had happened.

Most of the great walls of Babylon and their foundational structures still stand. They were excavated in the early 20th century by Robert Koldeway along with the rest of the city of Babylon.

In 1983 the leader of Iraq Saddam Hussein began a reconstruction project to restore the Walls of Babylon and recreate the Ishtar Gate. Despite the ongoing military conflict and civil war in Iraq, at some point they hope to recreate this magnificent ancient city in all its splendor.