The Kingdom of Israel, also known as the United Monarchy is one of the most unique civilizations of Mesopotamia in that its extremely recent origins are extremely contested. This is because nearly all of the "accepted facts" about the Kingdom of Israel come from the Bible and the Old Testament. Modern archaeology and history has long come at odds with these mythical stories that should now be looked at for what they are, myths rewritten from the some of the greatest civilizations in the ancient world. It just so happens that through the translation of the Hebrew Bible into Greek at the Library of Alexandria and its incorporation into the Greek canon would eventually allow it to be made much more popular than the oral tradition and cuneiform

In trying to write about the true history of the Kingdom of Israel and the Kingdom of Judah we wish to apologize to you in advance. There is no possible way to truly separate the myths from the facts in trying to discern the origins of the Jewish civilizations. The history of this Kingdom has been built on the lies of later Jewish descendants that wished to portray their defunct civilization in a much more flattering light.

Yet, in the process they completely corrupted and destroyed their own history and it is now impossible to really get to the true origins of their civilization unless through archaeological excavation. Also while the civilizations of Assyria, Egypt, Sumer, and Greece all generally recorded factual events in their written records, the Bible is often at odds with these contemporary records on many accounts.

It is ironic, in what started the entire field of Egyptology and archaeology in the 19th century by trying to prove the Bible correct, archaeology has actually proven the Bible to be such a falsified document that it is amazing how it was passed down for thousands of years as unadulterated fact. We are not religiously biased in any way in writing this, we are merely here to represent the scientific and archaeological facts regarding the origins of civilization. The embellishment of the Septuagint Bible is well agreed upon by the leading experts in the world and even reluctantly the modern Jews themselves.

This is only the account given by the Hebrew Bible however, and it is believed that the Book of Samuel was actually created by combing different source texts to produce this origin story. There are two earlier texts recovered that show the story of Israel and Judah was not so unified and there were competing elements within Jewish society on the best story to create. 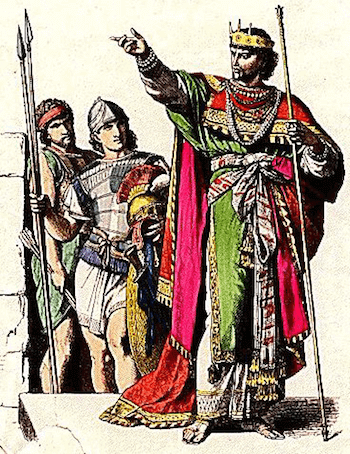 The most prominent in the early parts of the first book are the pro-monarchical source and the anti-monarchical source. In identifying these two sources, two separate accounts can be reconstructed. The anti-monarchical source describes Samuel to have thoroughly routed the Philistines, yet begrudgingly accepting that the people demanded a ruler, and thus appointing Saul by cleromancy.The pro-monarchical source describes the divinely appointed birth of Saul (a single word being changed by a later editor so that it referred to Samuel instead), and his later leading of an army to victory over the Ammonites, which resulted in the people clamouring for him to lead them against the Philistines, whereupon he is appointed king.[14]Textual critics also point to disparities in the account of David's rise to power as indicative of separate threads being merged later to create a golden age of a united monarchy. David is thought by scholars to have been a ruler in Judah while Israel, comparatively immense and highly developed, continued unfettered. Modern archaeology also supports this view.[11]Most scholars believe the Books of Samuel exhibit too many anachronisms to have been a contemporary account. For example there is mention of later armor (1 Samuel 17:4–7, 38–39; 25:13), use of camels (1 Samuel 30:17), and cavalry (as distinct from chariotry) (1 Samuel 13:5, 2 Samuel 1:6), iron picks and axes (as though they were common, (2 Samuel 12:31). The historicity of the conquest described in the Book of Samuel is not attested, and many scholars regard this conquest as legendary in origin, particularly given the lack of evidence for the battles described involving the destruction of the Canaanite peoples (evidence points to a largely peaceful coexistence between Israelites and Canaanites). Most scholars believe that Samuel was compiled in the 8th century BC (rather than the 10th century where most of the events described take place) based on both historical and legendary sources, primarily serving to fill the gap in Israelite history after the events described in Devarim. This gap in historical record is characteristic of the Late Bronze Age, a period of general cultural impoverishment of the whole Levantine region. Many events from the United Monarchy period are unconfirmed, though the existence of the "House of David" has been confirmed historically.