The Kingdom of Judah was an ancient nation that arose in Mesopotamia during the period of the Iron Age.

The Kingdom of Judah arose no earlier than 900 BC and by about 700 BC its capital had become the city of Jerusalem.

During this time the Kingdom of Judah was a vassal state under the Assyrian Empire and would prosper under this arrangement. When the ruler of Assyria named Sargon II died in 705 BC many of the former vassal states decided to revolt and assert their independence. Judah under the rule of Hezekiah attempted a revolt against the new king named Sennacherib but he was going to have none of that.

As Sennacherib began organizing military campaigns in 703 BC the Kingdom of Judah entered into a military alliance with Egypt but the civilization was long past its prime. During this period Egypt was actually not ruled by native Egyptians but the Kush dynasty that was based from Nubia. The Kushites conquered Egypt during the Third Intermediate Period which signaled the end of ancient Egyptian civilization as we picture it. Egypt would enter the Late Period during this era in which it would be conquered and rule by all sorts of foreign civilizations.

When Sennacherib turned his forces towards Judah in 701 BC the Jews thought the Egyptians would come to their aid but they did not. Refusing to pay the tribute, Sennacherib and the Assyrians sieged the city of Jerusalem until they relented. According to the Hebrew Bible, king Hezekiah was forced to pay Sennacherib 300 talents of silver and 30 talents of gold as tribute and for not handing over the Jew gold and silver right away. According to the Hebrew Bible the king was even forced to strip the decorations off the Temple walls to produce the required sum. 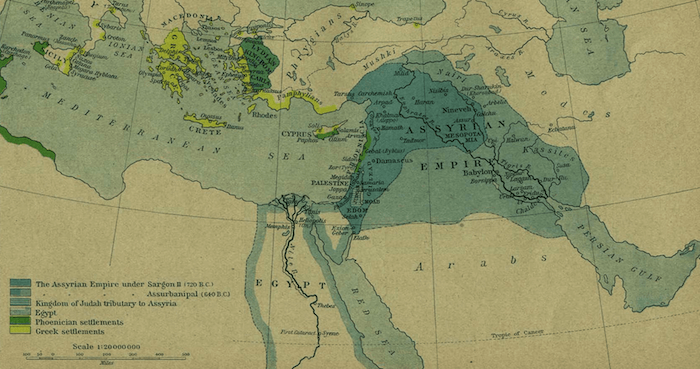 Despite making the tribute payment Sennacherib renewed the siege of the city. The Hebrew Bible states that one night of the siege an angel of Yahweh was able to kill 185,000 of the Assyrian troops and end the siege of the city. However, this account does not seem likely as this would have represented a fantastic victory of Judah and probably completely decimated Sennacherib's army. Considering he soon after went on to conquer Babylonia and Elam he did not seem to have "limped home" and there has never been an Assyrian text recovered that documents any troop loss like this. In fact, according to Sennacherib's Prism which describes his conquests, the Assyrian king:

"And Hezekiah of Judah who had not submitted to my yoke...him I shut up in Jerusalem his royal city like a caged bird. Earthworks I threw up against him, and anyone coming out of his city gate I made pay for his crime. His cities which I had plundered I had cut off from his land."

Following the siege it is described how a larger tribute was forced upon the Jews and the prism goes onto document the conquest of 46 other towns and numerous other small villages. While the Bible records the tribute as only 300 talents, Sennacherib recorded a payment of 800 talents of silver following the end of the conflict which suggest the Bible stories are indeed fabricated. It is also documented how Sennacherib returned with treasures from Jerusalem and stored them in his capital of Nineveh.

Despite attempting a rebellion king Hezekiah would remain on the throne as a vassal king. Overall, the Hebrew Bible and ancient Assyrian text are often in conflict for the events they describe. However, based on the evidence it is clear that the Assyrian clay tablets are much more reliable and factual than the Bible even on a good day.

However, Sennacherib would later be killed by his own son Ardi-Mulishi in 681 BC, an event corroborated by both the Bible and historical records from Neo-Babylonia. He is identified as Adrammelech in 2 Kings and clay tablets. Many modern Assyryologists believe that Sennacherib was not assassinated for destroyed Babylon but for choosing his son Esarhaddon over Ardi-Mulishi, although this event may have played a role.

Esarhaddon did succeed Sennacherib as leader of Assyria and ended up becoming another one of the great kings to lead.

The end for the Assyrian Empire and a shift in hegemony over the region would occur when the Chaldean king named Nabopolassar took control over Babylonia and took advantage of weak and ineffective leadership in order to stage a massive rebellion. Forming a diplomatic and military alliance with the many tribes of eastern Asia that would eventually become the Median Empire, Nabopolassar launched a punishing assault on the Assyrians they were unable to withstand.

In 605 BC the Assyrians would lose the Battle of Nineveh which would result in the sacking and razing of their capital city Nineveh along with Ashur later. Following the battle the remnants of the Assyrian force would flee to the city of Harran where they would later be defeated once again in what is known as the Fall of Harran. The Egyptians under king Necho II would eventually field a mercenary force to aid the Assyrians and the struggle for their survival.

The Kingdom of Judah would be badly defeated in the Battle of Megiddo in 609 BC. By trying to stop the invading Egyptians from moving north to meet their Assyrian allies the forces of Josiah would be crushed in this engagement. The Egyptians would continue up to the city of Carchemish where they would meet up with the last remnants of the Assyrian army to try and take back Harran. They were unsuccessful and the Babylonians returned in full force to crush them completely. At the Battle of Carchemish exactly this happened and Assyria was officially no more, the region being controlled by Nabopolassar and his son.

The Egyptians would barely limp home from their defeat at Carchemish and would make a stop at Judah along the way. Once again Necho captured the civilization and deposed the king named Jehoahaz who was the son of Josiah. Necho demanded 100 talents of silver and 1 talent of gold from Judah and Necho made his older brother Eliakim the king. Changing his name to Jehoiakim, the previous king Jehoahaz was taken captive to Egypt where he died in exile.

During this period the Babylonians were forced to compete with the last remnants of the Egyptians for control over the eastern Mediterranean. Between 597 and 582 BC the kingdom of Judah was completely destroyed by Nebuchadnezzar II and the elite were all deported to Babylon in order to pacify them. This is where the ancient Talmud would be written which is full of vitriol for other civilizations in Mesopotamia for the "subjugation" of the Jews. They try to make it sound like it was persecution against them personally because of their religious faith but the fact of the matter is the Jews lived in the rough neighborhood of the world where warfare was commonplace and they just never happened to be on the winning side.

After the fall of Jerusalem to Nebuchadnezzar II the Kingdom of Judah was incorporated into the Neo-Babylonian Empire as a new provence. Mass deportations like this were commonplace in ancient times and were meant to pacify a civilization that was too rebellious. What would happen is the entire population would be relocated to a new area where they would have new neighbors, have to start new lives etc. that would all detract their attention away from forming a rebellion against the king. If the Jews were in charge and won the battles surely they would have done the same thing.