Media was an ancient civilization that existed in the area now known as northwestern Iran and southeastern Turkey. The capital of Media was known as Ecbatana and became very popular during the Achaemenid Empire. While an independent civilization for brief periods of history, Media usually remained under the control of a larger foreign power and hence its culture was greatly influenced by whoever that was. From the Assyrians to the Persians to Alexander the Great, the Kingdom of Media changed hands many times throughout its history.

The civilization Media was believed to have been started around 1500 BCE to 1000 BCE by migrating nomadic tribes around the Bronze Age Collapse. This period of political, social and economic instability saw massive migrations and movements of nomadic tribes into the civilized portion of the world. The culture of Media is very much similar to that of the Persians in that they dressed similar and used the same style of equipment.

The reason these Aryan tribes were able to settle in these regions was because the great civilizations of the time Assyria, Babylonia and Elam were also experiencing a period of stagnation during the Bronze Age Collapse which left it unable to prevent anyone from settling near their borders. This allowed an influx of new people to settle in the region and establish new civilizations. 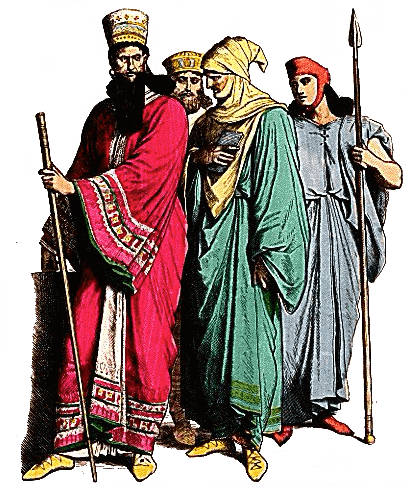 Mede Nobleman, Persian Nobleman and Commoner - A History of Costume (1880)

Based on the accounts of Herodotus there were six tribes that came together to form Media known as the Busae, Paretaceni, Struchates, Arizanti, Budii, and the Magi. The major cities they built were Ectbatana, Laodicea and Rhages and the six tribes lived within the geographic triangle these cities formed. There was also another major city known as Apamea but no one knows quite where it was in the modern era.

Of the six Median tribes the Magi inhabited Rhaga which is now modern day Tehran, the Paretaceni resided in Aspadana, the Arizanti lived around Kashan and the Busae lived around Ectbatana. The other two tribes the Struchates and the Budii both lived within smaller villages inside the triangle that these cities formed that made up the Median territory.

The original Mede language is unknown and they had a unique religion based on Magi known as Mithra or Mazdaism worship. During the final reigns of the Median kings the reforms of Zarathustra had an impact on the culture and religion of the civilization.

Between 1000 BCE and 700 BCE a portion of western Media fell to the conquests of the Assyrians who began to emerge from their period of stasis and enter into a new period of conquest and empire building. It was known that there was vassal treaties in place between Media and Assyria between the following kings: Tiglath-Pileser III, Sargon II, Sennacherib Esarhaddon, Ashurbanipal and Ashur-etil-ilani. This would guarantee the protection of Media from the still partially nomadic tribes of Scythia and the Cimmerians and also allowed the civilization to prosper by being connected economically to Assyria.

Media was able to grow alongside the Assyrian Empire during this golden age and transform itself into a great and powerful civilization. When the Assyrian state began to fall apart to internal strife under the rule of Sin-shar-ishkun (622-612 BCE), an alliance of Medes led by king Cyaxares along with many other tribes began to sack cities.