Esarhaddon was the second great king of the Neo-Assyrian Empire and the son of the first great king Sennacherib with his second wife Naqi'a/Zakitu. He reigned from 681 to 669 BC and presided over a golden age in Assyrian history. He continued the conquests of his father all throughout the Mesopotamian region. He is famous for rebuilding Babylon as all of the other cities throughout Assyria and launching successful military campaigns that greatly increased the power and influence of Assyria. He successfully passed down rule to his son Ashurbanipal who was the last great king of Assyria.

Esarhaddon was not the oldest one of his brothers but he was named by his father as successor. His brothers tried to discredit him but he had the backing of the religious oracles who said he would free exiled peoples and rebuild Babylon, prophecies which later became true. Early in his life due to the conflicts over his naming as successor he was forced into an exile reported to be beyond Mitanni.

According to some accounts it was Esarhaddon who ordered the murder of his father Sennacherib but the biblical ones suggest it was the brothers who did it after his failed siege of Jerusalem. This makes sense as Esarhaddon would have nothing to benefit from his fathers untimely death since he was the legal successor anyways. So no motive and he was in exile anyways so it does not seem that the opportunity was possible.

His brothers had motive, means and opportunity and in 681 BC they murdered Sennacherib. Upon the death of his father Esarhaddon returned home to Nineveh and was forced to fight his own brothers in a six week civil war. Esarhaddon was formally declared king in 681 BC and his brothers fled Assyria. All of their followers and families were put to death right after.

Esarhaddon in 681 also started to rebuild the city of Babylon that his father had razed to the ground as well the city of Nippur. During this period he restored the buildings, religious statues and monuments. He is credited with rebuilding the Esaggila and the Eukr back at Nippur which some historians credit as the Tower of Babel.

In addition to rebuilding Babylonia he also rebuilt the Assyrian sanctuary known as Esharra in the city of Ashur as well.

Esarhaddon after starting the massive rebuilding efforts then focused his attention on subduing the nomadic Semitic tribes that existed in the southern part of Mesopotamia. These tribes known as the Dakkur and Gambulu had been raiding the Assyrian countryside and messing with citizens. After pushing these tribes back in 679 BC Esarhaddon was forced to fight the Cimmerians who had become united under king Teushpa.

Esarhaddon defeated the Cimmerian invaders at Habushna/Hupisna and also crushed their allies the Hilakku as well. The Cimmerians were forced to retreat to Asia Minor where combined with the Scythians and the Urartus they were able to conquer the Kingdom of Phrygia in 676 BC. This was a major victory for Esarhaddon and the Assyrians because the Cimmerians had killed his grandfather Sargon II. 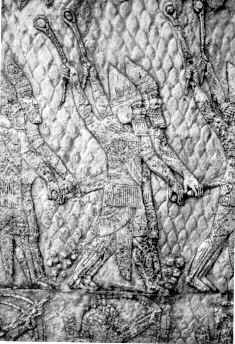 Assyrian Warriors with Slings - Palace of Sennacherib ~600 BC

Next in his series if engagements king Abdi-Milkutti of the Phoenician city Sidon rose up in rebellion. Esarhaddon lay siege to the city of Sidon and destroyed it along with beheading Abdi-Milkutti in 677 BC. He later rebuilt the city and named it Kar-Ashur-aha-iddina or "Harbor of Esarhaddon" and relocated the entire population to Assyria.

This was a common practice by Assyrian kings to relocate conquered people so they could not rise up again. Part of the plunder of Sidon went to neighboring Tyre who was ruled by Baal I an Assyrian ally and vassal who aided in the siege of Sidon. According to a recovered Assyrian peace treaty during this time the city of Tyre along with the Kingdom of Judah, Edom, Moab, Gaza, Byblos, Ammon, Ashdod, Ashkelon, Ekron and what is described as 10 kings from the coast of the sea and 10 kings from the middle of the sea which some associate with Cyprus.

Next Esarhaddon conquered the towns of Sissu and Kundu that were located in the northern Taurus Mountains. This was the area known to be inhabited by the Scythians under their king Ishpakaia. He is also noted to have contended with the Gutium people that resided in the Zagros Mountains. After the Scythians and Cimmerians had conquered the kingdom of Phrygia the Assyrians tried to make peace by wedding one of Esarhaddon's daughters to the Scythian prince Partatua of Sakasene.

Esarhaddon would also be launch military campaign against the Medians under king Khshathrita (Phraortes) who had conquered territory that used to belong to the Hittites such as the state of Melid. Esarhaddon launched a siege of Melid in 675 BC but was unable to conquer it. He is also known to have conquered other territories of Media throughout the Zagros Mountains.

Also during 675 BC the vassal territory of Elam began an invasion of Sippar under Humban-Haltash II but was unsuccessful and died soon after. His brother Urtaku would later make peace with Assyria after the failed rebellion attempt.

A group known as the Mannaeans which was a former vassal state of Assyria began to expand their territory around Lake Urmia and into Zamua where they began to disrupt the valuable horse trade between Parsuash. They also refused to pay further tribute so Esarhaddon was forced to launch a military campaign against them as well to restore this vital trade network.

Esarhaddon attempted a military campaign against Egypt but was unsuccessful. It appears he was trying to expand the borders of the Assyrian Empire in nearly every direction. Soon he was also waging war in the land known as Bazu which is most likely modern day Qatar. According to the ancient texts the land was described as being covered with scorpions and snakes like ants and it was full of salt deserts.

Later in 673 BC he launched a military campaign against Urartu under the ruler of king Rusas II who had gained strength after many years of losses to Sargon II and the Cimmerians.

The rightful heir to Assyria had been Esarhaddon's son Sin-iddina-apla who was the crown prince at the time. His second eldest son Shamash-shum-ukin was going to become the ruler of Babylon. However, in 672 BC Sin-iddina-apla died and his death caused Esarhaddon's third youngest son named Ashurbanipal to assume the title of crown prince and eventually his fathers throne.

Ashurbanipal was not popular with the courts and priests of Assyria however, so contracts were all written before Esarhaddon's death that would guarantee loyalty to him. They did not believe him to be the strong king that Sennacherib or Esarhaddon was and therefore his authority had to be guaranteed before Esarhaddon died. However, he managed to defy all of them and expand the empire to its furthest limits despite their naysaying.

After his sons death Esarhaddon went to war with king Taharqa of Egypt in 671 BC. At this time the city of Tyre and possibly Ashkelon rebelled against his rule so he was forced to deal with that with a portion of his army. With the remaining part he crossed the Sinai and entered into Egypt. In the summer of 671 BC he captured the city of Memphis and Taharga was forced to flee Egypt. Esarhaddon now called himself the King of Egypt, Patros and Kush. However, the conquering of Egypt was not to last long for as soon as Esarhaddon left Egypt rebelled against him.

Esarhaddon was called back to the city of Nineveh to deal with the execution of several Assyrian nobles so he sent his general Sha-Nabu-shu in his place to reconquer Egypt. Esarhaddon himself returned in 669 BC to Egypt to oversee the progress but he was getting older and he died in the fall. It is believed he died in the Harran region and was succeeded by Ashurbanipal as king of all the Assyrian Empire and his other son Shamash-shum-ukin as king of Babylonia.

Ashurbanipal picked up right where his father had left off in Egypt and was able to finish off the Kushite rulers of Egypt and Nubia. Esarhaddon's legacy would continue on through his son but Assyria would be soon doomed for collapse. Following the death of his son the entire empire would fall apart due to over-extension and lack of troops to enforce order. What started as a few states refusing to pay tribute started a revolution and led to the collapse of the Assyrian civilization for good.