The Ubaid Period between 5300 BC and 4100 BC is when the first Sumerian cities really began to rise and the population began to really grow. The main characteristics of this period were a reliance on temples and the development of irrigation. It was during this time the relationship between the irrigation systems and the temple institution developed that were necessary to facilitate their construction. The temple institution instrumental in unifying a social diverse population necessary to create the large scale public works projects.

The Ubaid Period regardless of written records shows significant human presence as there is a distinct and uniform culture of pottery production that is spread all across the Persian Gulf and Mesopotamia. The city of Eridu was established during this period around 4,800 BC and was home to about 5,000 people. The city of Eridu relied heavily on the centralized role of the temple.

These temples appeared to serve dual purposes as there was evidence of burning for offerings but also grain storage. It appears that in addition to being a religious center the first temples were also administrative centers, much like the palaces in the Minoan civilization on Crete. 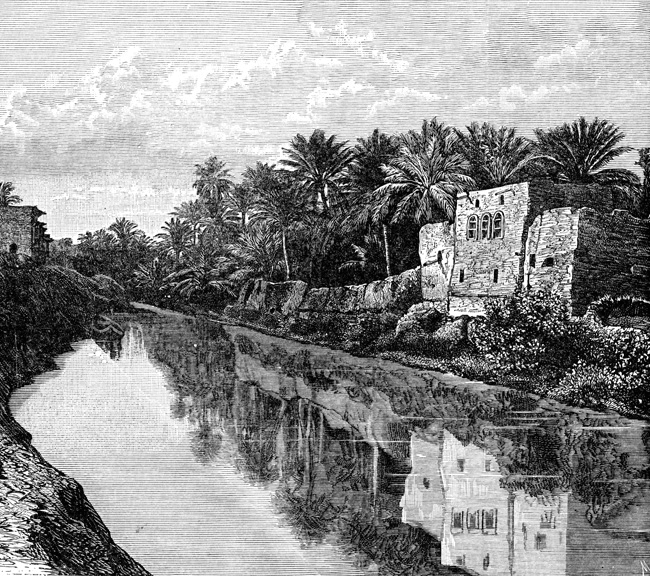 During this time all the cities appear to have evolved from religious and ceremonial centers, something that would greatly factor in the rest of Sumerian history. The temples represented a unifying factor for people and led to the concentration of resources and the development of the class structure. This in turn led to the direct development of cities themselves and by 4,500 BC there was full fledged towns appearing with increasing distance from the core and public buildings along with a surplus of agriculture necessary to support a growing population. The growing population would allow for specialization and this saw the development of artisans and craftsman.

The city of Eridu was comprised of farmers that began irrigation agriculture and other public works projects. Some believe these people were breakaways from the Samarran culture of northern Mesopotamia, but others suggest they came from Arabia. Studying genetics may be the answer to this problem. As of right now there is no definitive origin on the people of Sumer. Eventually Eridu was surpassed in size and influence and by the city-state of Uruk. This shift is actually noted in Sumerian myths when the god of wisdom and the city of Eridu called Enki passed "me" (gifts of civilization) to Inanna the goddess of love and war and the patron of Uruk.

Ziggurat were the main type of unique pyramidal structure that the Sumerians constructed much like the Egyptians built the pyramids. They had important symbolic and religious significance in their culture and were used in a much different fashion than the Egyptians who primarily used them as tombs (with the exception of the disputed Great Pyramid of Giza). At the top of a ziggurat was usually a temple to the major god of the city and the whole idea was believed to be man creating a mountain, something very sacred in Sumerian culture and mythology.

These massive stepped pyramids were the center of the daily life in the city and were used for worship, trade, politics, and much more. They were the center for the storage and distribution of the surplus, and were basically massive customs houses tied to the ancient religion. People would come with offerings for the gods as well as pay their taxes to the ruling elite. In the many layers excavated in modern times there have been fish bones and other remains discovered which corroborates this.

The temple administrators were the land owning elite who paid the workers usually in crops or goods as there was no coined money in ancient Sumer. They employed manual laborers and specialists to construct canals and irrigation ditches in order to facilitate more agriculture and this ultimately increased their wealth further. As discussed before canals would create unequal land values and this enabled the farmer with a canal to grow more and hire more farmers which reinforces the cycle of power against a farmer who cannot afford to built a canal to sustain his farm.

New temples were usually rebuilt on top of the same sites as old temples usually in a much grander fashion due to the religious and spiritual significance. For example when Alexander the Great conquered Babylon he tore down the crumbling ziggurat Etemenanki which was most likely the biblical Tower of Babel and was going to rebuilt it in an even bigger fashion. However, after his sudden and mysterious death the great ziggurat would never be constructed and the city of Babylon would be ravaged during the Wars of the Diadochi never to be rebuilt again.

Ziggurat of Ur Photo

Ziggurats had massive labor and materials costs. They were constructed mostly out of clay packed bricks that had plant fibers mixed in for extra support. Sometimes the bricks were fire baked with a kiln which could have provided massive structural integrity capable of creating extraordinarily large structures. One of the most famous ziggurats built during this ancient era was the Ziggurat of Ur and served as later inspiration for later models.

Other civilizations that came later also built great ziggurats. For example it was known there existed a massive ziggurat at the Assyrian capital city of Nineveh however, this city was destroyed so no one really knows what this one looked like. Another famous ziggurat was the Etemenanki built by the Chaldean king named Nebuchadnezzar II in the Babylonian capital city of Babylon. As you can see the influence of the Sumerians was felt long after their collapse and the idea of a ziggurat was incorporated by every major civilization that followed in the history of Mesopotamia.