Mesopotamia was also known as the Fertile Crescent or the Cradle of Civilization because it is believed that the first civilizations began here at the end of the last Ice Age when the receding glaciers caused flooding from the Zagros Mountains to flow south and create the Tigris and Euphrates Rivers that eventually flooded and created the Persian Gulf.

This massive flowing water through the desert is what gave the civilizations the ability to grow as it enabled agriculture on a much larger scale during the Neolithic Revolution. This in turn led to higher populations, more houses and eventually cities. This all led to the rise of civilizations and this area was known as one of the six cradles of civilization. 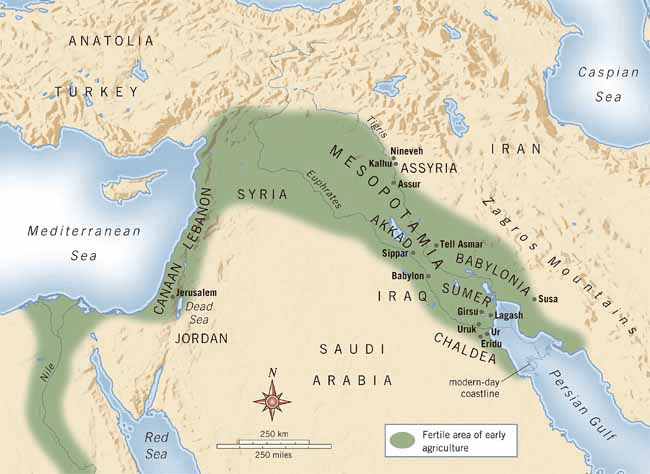 The defining features of the ancient Mesopotamian civilizations was their reliance on and mastery of water. The ancient Mesopotamians built great canals and irrigation projects that increased their agricultural yields tremendously which let them sustain a massive population in the dry and arid desert. In fact the first wealth was created by farming normally vs with irrigation as one would always yield more crops. This surplus could be sold or traded to other farmers for other material goods. The higher crop yields would increase the value of the land and thus the wealth of the owner. As the owners wealth increased they could afford to irrigate more land and thus the first wealthy elite were born. 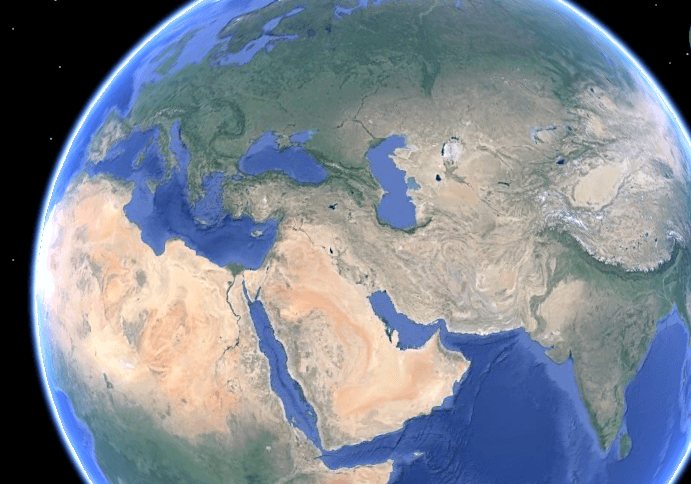 The civilizations of Mesopotamia are also well known for their corruption, brutal warfare, internal power struggles and the invention of slavery as well. They also created some of the ancient worlds greatest cities, pioneered some of the first scientific concepts and worlds engineering feats. They traded with far away portions of the world and also are responsible for developing most of the ancient languages as well.

Even today, the region of the Middle East or modern day Mesopotamia is one of the most important regions in the world for its natural resources of oil. In the ancient days it developed out of regional economies to eventually be a major crossroads in the caravan trading networks which formed the massive land and maritime Silk Road.

After fighting amongst each other for thousands of years eventually the Achaemenid Empire conquered the whole region and was then swiftly conquered by Alexander the Great. After his sudden and mysterious death his kingdom was broken apart in an internal power struggle known as the Wars of the Diadochi. Mesopotamia was gained by Seleucus I who established the Seleucid Empire.

The Seleucid Empire was later defeated by a combined assaulted from the Roman Empire and the Parthia Empire where it was divided roughly in half by the two. Eventually when the Roman Empire collapsed Mesopotamia fell under control of the Byzantine Empire which survived until it was conquered by the Ottoman Empire. From the Ottomans the region is brought into the modern era.

Below is a complete list of Cultures located on in Mesopotamia.

The Akkadian Empire was a mysterious empire that grew out of the city-state of Akkad. It is known as the first empire in all of recorded history and vanished as quickly as it rose. What makes it so mysterious is that no one has been able to locate the city of Akkad upon which the empire was surrounded. 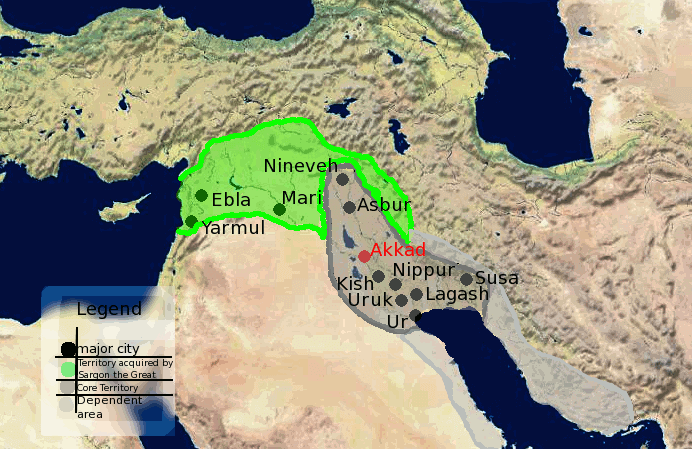 What is known is there was a widespread development of bilingualism at the time that mixed the language of the Sumerians with that of the Akkadians and suggest they were all under one rule. The Akkadian Empire which was known to have stretched from the Mediterranean sea all the way through modern day Saudi Arabia and was truly a remarkable feat at the time.

Learn more about the mysterious Akkadian Empire here and their lost city of Akkad.

Assyria was a great civilization that eventually became the largest empire in all of ancient Mesopotamia. Ruling over a territory that included Babylon and many other Cultures at one point Mesopotamia was simply referred to as Assyria by Herodotus.

With a dynastic linage going back thousands of years, the ancient Assyrians came from the remnants of the Akkadian Empire when it collapsed. Always at odds with Babylonia to the south, the history of these two civilizations is often very intertwined.

In fact, when Babylon revolted one time under Assyrian rule the king simply had the town razed to the ground and the bricks thrown about the desert. He was later assassinated by his son and Babylon rebuilt but regardless.

Want to learn more about the great history of Assyria? Click here.

The ancient civilization of Babylonia was built around the city of Babylon in southern Mesopotamia. Following the depopulation of the region by the People of Sumer due to the soil being poor, migrating Amorites established settlements that would form the base for a great civilization to come.

Under the leadership of Hammurabi Babylonia expanded for the first time and then it was conquered by the Assyrians before reasserting control again under Nebuchadnezzar II. Babylonia is credited with building many wonders of the ancient world and the city of Babylon is revered in nearly all ancient texts as being a city with great cultural and religious significance.

It is extremely important to understand the history of Babylon in relation to the larger region at whole. It was around the Tigris and Euphrates Rivers that most of civilization was started and the interactions these early city-states had with each other provided great cultural diffusion.

Eventually Babylonia like the rest of Mesopotamia collapsed and would remain abandoned until the rise of Islam in 600 CE. Want to learn more about the ancient empire of Babylonia? Click here.

Chaldea was an ancient civilization that formed during a period of decline for Babylonia. The civilization produced two great kings that would later conquer all of Babylonia and rename it Chaldea, even if for a short while. An interesting civilization that was brief as it was interesting, the two kings Nabopolassar and Nebuchadnezzar II launched Babylon into a golden age that saw a building frenzy in what would really place Babylon on the map in the ancient world. 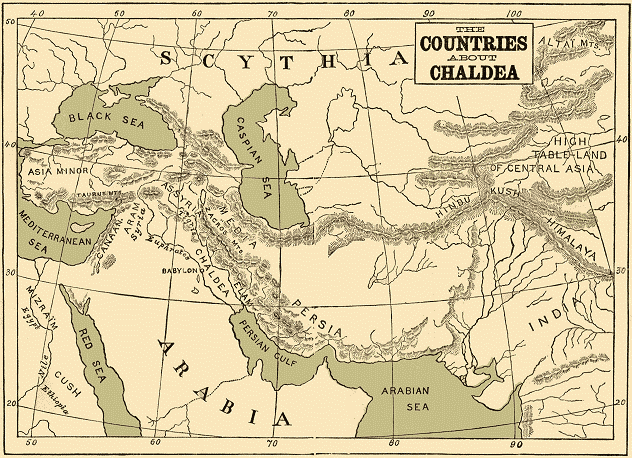 The Babylon that Nabopolassar and Nebuchadnezzar created would later become the iconic Babylon that Alexander the Great conquered during his massive campaign across Asia. It would also become the famous place that he would later die in after his return voyage. Learn more about the history of Chaldea and how it loudly erupted onto the world stage before being assimilated and largely forgotten about in ancient times. Click here to view the complete history of Chaldea.

The Hittites were a powerful empire in the ancient world and the first ones to discover iron apparently. This civilization thrived during the early ancient era contemporary with civilizations such as Mycenaean Greece, Assyria, Babylonia, Egypt and others.

The Hittites civilization would later fall apart during the Bronze Age Collapse during a massive period of chaos and warfare that brought on 400 years of dark ages for most of the known world. The Hittites never recovered and after a few skirmishes with neighboring Assyria they were defeated.

King Nirari began a massive effort of relocation and settlement efforts with the newly conquered Hittites which means they simply were absorbed and assimilated within the fledgling Assyrian Empire. The Assyrians would also later conquer Babylonia and vice-versa which leads to a mixing of cultures and the creation of new hybrid cultures such as the Babylonian-Assyrian culture.

Click here to learn more about the Hittite civilization and how they were conquered and assimilated into the Assyrian Empire.

Nabetea was a very mysterious civilization that existed in the aftermath of the collapse of Alexander the Great's empire. Based out of their capital city of Petra, these people were able to master the water of the desert in the area presently known as Yemen and developed an advanced caravan trading route which made them very prosperous.

As soon as the caravan trading network disappeared, the Nabatean Kingdom disappeared as well. However, their capital city Petra still exists and is a popular tourist attraction in modern times. Want to learn more about the Nabataean Kingdom? Click here.

Sumer was one of the first real civilizations to develop in the Mesopotamia region. Known for their development of writing called cuneiform and their architecture, the Sumer civilization was conquered pretty quickly by the Akkadian Empire however they did not disappear. Their influence was left behind in many regards such as language, art and belief systems. 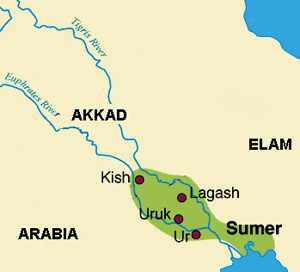 They were also noted for the creation of massive earthen ziggurats that were very similar to other pyramidal structures created by early humans around the planet. Sumer was known for its massive cities of Ur and Uruk that became major influences long after the collapse of Sumer.

Learn more about the development of the first form of writing along with the unique history of Sumer here.