Naram-Sin was the son of Manishtusu the grandson of Sargon the Great who ruled over the Akkadian Empire and would bring the civilization to its greatest heights. He was also the nephew to king Rimush and his aunt was the High Priestess En-hedu-ana so he had many political connections and was able to rule with great stability in the empire. At this time the Akkadian Empire ruled from the Mediterranean Sea all through Sumer and Elam with the capital at the city of Akkad. Naram-Sin was the first Mesopotamian king to claim his rule as divine right and used the same title as Lugal-Anne-Mundu as "King of the Four Quarters". This is an important precedent, one that would be passed down through the succeeding Assyrian and Babylonian cultures as well.

Naram-Sin established a massive trading network that extended as far away as the Harappan civilization based around the Indus River Valley in India, and he conquered nearly all of Mesopotamia and the Surrounding areas. He defeated the tribes of the Taurus Mountains and Satuni who was the chief of Lullubi that lived in the Zagros Mountains. This event was famously documented in the Naram-Sin Victory Stele. He also controlled a significant amount of territory around the Persian Gulf after defeating the king of Magan. While not typically famous in history, the Akkadian Empire under his reign was truly impressive considering this was over four thousand years ago. 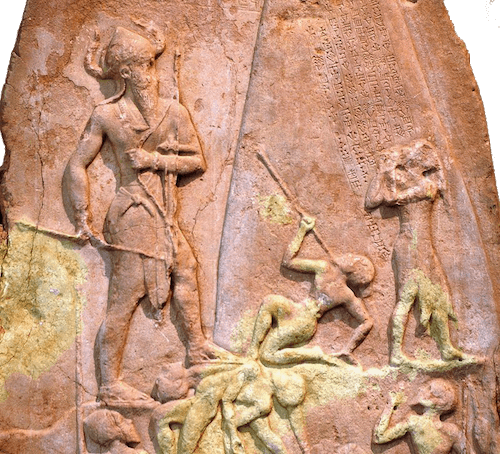 According to the Sumerian King List he reigned for 56 years and describes how during his reign he conquered cities such as Uruk and Subartu. It also describes how he built temples and other public works projects at the cities of Akkad, Nippur and Zabala. He also began construction on the cities of Nagar and Nineveh and brought about a great golden age of the Akkadian Empire.

One Mesopotamian myth has it that the goddess Inanna abandoned the former capital of Akkad following Naram-Sin's plunder of the Ekur (temple of the god Enlil) in Nippur. In his anger, Enlil brought the Gutians down from the hills east of the Tigris, to bring plague, famine and death throughout Mesopotamia. To prevent this destruction, eight of the gods decreed that the city of Akkad should be destroyed to spare the remaining cities. While this story may be mythological, it does suggest that Gutian raids were already beginning during this period.[citation needed]Naram-Sin's famed victory stele depicts him as a god-king (symbolized by his horned helmet) climbing a mountain above his soldiers, and his enemies, the defeated Lullubi. Although the stele was broken off at the top when it was stolen and carried off by the Elamite forces of Shutruk-Nakhunte, it still strikingly reveals the pride, glory, and divinity of Naram-Sin. The stele seems to break from tradition by using successive diagonal tiers to communicate the story to viewers, however the more traditional horizontal frames are visible on smaller broken pieces. It is six feet and seven inches tall, and made from pink sandstone.[4] The stele was found at Susa, and is now in the Louvre Museum.[5] A similar bas-relief depicting Naram-Sin was found a few miles north-east of Diarbekr, at Pir Hüseyin.

The rock relief lies on the cliff side of Darband-i-Gawr (which means the pass of the pagan). This pass is part of the south-eastern side of the Qara Dagh (also written Kara Dag) mountain range. Qara Dagh is a Turkish term which means the “black mountain.” It is a double range of cretaceous limestone, reaching a height of more than 1,700 meters above sea level.Naram-Sin Rock Relief at Darband-iGawrThe relief was carved on the surface of the cliff. Therefore, the relief appears convex-concave, from above downward. It is about 3 meters in height. The relief shows a victorious warrior standing on the corpses of two enemies. The warrior wears a rolled up and rounded cap (similar to the ones which were used by the Ur III kings). The cap fits the head and covers the skull from the frontal to the occipital areas. Only the lower parts of the forehead, external ear, and hair behind the ear appear. The face looks to the left side (of the body) and the right eye appears widely open; there is no eyebrow. The nose is small but convex and its tip is pointed. The beard hair is curled and is prominently highlighted (similar to the neo-Assyrian sculptures). Below the lower jaw, the beard extends in curvy lines downwards on the chest wall to the level of the nipples. The warrior wears a beaded necklace and two bracelets. The body above the waist is bare. The muscles of the chest wall, shoulder, and upper arms had a bodybuilder contour. The right arm holds an axe (or mace) while the left one holds a bow. The bow is more or less triangular in shape (not a composite bow, though) and differs from the bow which was depicted on the Victory Stela of Naram-Sin at the Louvre museum in Paris. The warrior wears a knee-length kilt. The waist is narrow and there is a multi-layered belt around the mid-abdomen; one end of the belt hangs down on the right thigh.The right leg is straight and extended, and its foot presses (not directly) on an enemy corpse. The left leg is flexed at the knee and is lifted off the ground as if the warrior is about to ascend something. The left foot also sits on an enemy corpse. The enemies were depicted much smaller in size when compared with the main warrior figure (similar to the ones seen on the Victory Stela of Naram-Sin). The enemies have ponytails and lie flaccid on the ground (they are dead already!). The overall depiction of the enemy corpses is very similar to those seen on the Victory Stela of Naram-Sin.The overall scene looks like that of the Victory Stela of Naram-Sin which shows his successful military campaign against the Lullubi and their king Satuni; local villagers don’t (and didn’t) know this stela! Why have they been calling this relief “Naram-Sin” since centuries? The Lullubi were tribes living at Zamua area, modern-day Zagros Mountains of the Iraq-Iran border. Some scholars think that this man is Anobanini (or Anu Banini) because of great similarity in the overall depiction of the attitude, clothes, bow, and posture of that king’s relief in Sar-e Pole Zahab (modern-day Western Iran). Another theory suggests that this is a Neo-Sumerian king (from Third Dynasty of Ur); it is well-known that the Neo-Sumerians had campaigned the Lullubi land nine times. Mr. Hashim Hama Abdullah, Director of the Sulaymaniyah Museum, and Mr. Kamal Rashid, Director of the Sulaymaniyah Antiquities Directorate, said that most likely this man represents a local ruler or king of what is known today as Iraqi Kurdistan. In addition, it seems likely that the relief originally contained some cuneiform inscriptions but they were erased (through weathering or deliberately).[6]

Naram-Sin was succeeded in rule by his son Shar-Kali-Sharri. His empire was slowly undone following his rule and would later be split into many new different fragment civilizations. It would be during this era that the civilizations of both Assyria and Babylonia along with the last ethnic dynasties of Sumer.

The Akkadian Empire would fall apart upon the death of Naram-Sin during a period of famine and drought and invasions from neighboring Gutium By 2124 BCE much of the Akkadian Empire territory in the fertile crescent was under Gutian control. However, they were ineffective and weak rulers and they only lasted for about 125 years before being expelled by the 3rd Dynasty of Ur.